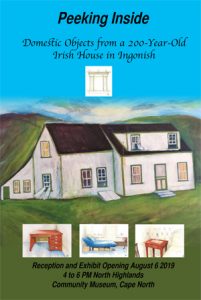 Peeking Inside: Domestic Objects from a 200-Year-Old Irish House in Ingonish

A house can be an historical document.

This exhibit results from the restoration of the house of James Donovan and Catherine Power. James, son of Jeremiah Donovan and Elizabeth Robinson, were among the first Irish to settle in Ingonish. This exhibit will focus on some of the objects and home-made furnishings that were found within the interior and walls of the house.

Other Irish immigrants moved on to Dingwall, Cape North and Bay St Lawrence. The Irish have traditionally represented 10 percent of Cape Breton’s population.